Almost a month on

And where are we? Well, this time it hasn't been so much a case of laziness or time-wastery that's led to such a huge gap between posts: I'm pleased to announce that PyIgnition is still faring very well. The 1.0 release is still going very much to plan, and will most likely be finished by the end of this month. To share news on all that has been added since the last update here would take far too long so I'll instead give you this link to the page for the 1.0 release, which gives a comprehensive list of everything that has been or is still to be done, and then elaborate upon the more interesting developments here.
Behold! A screenshot! 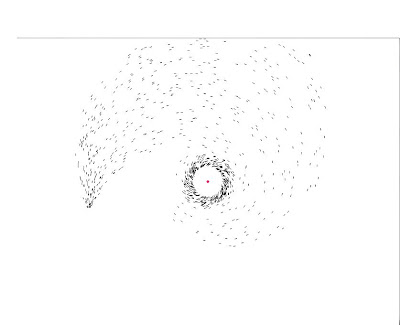 What's this mad spiffery, you say? Vortex gravity! Yep, I managed to get it to work. It was surprisingly difficult actually, and it's still not yet perfect (firing particles directly at it causes all sorts of unintended madness), but it's at least working reasonably well. Essentially it calculates how far a given particle is from its centre, and then using that along with the magnitude of the particle's velocity it determines the centripetal force required to keep it perfectly in orbit. It then adds to that a tiny additional force (also towards its centre) so that the particle will accelerate inwards whilst rotating around it. Of course, it uses a slight variation on the process outlined here as calculating the distance and the magnitude of the velocity for every particle would involve a lot of square roots (and they're evil, as we know), but the force calculated is the same. And that's vortex gravity!
Another key development is 'cushion distance' for particles which have radii. Previously, collisions with obstacles would use particle centres alone which, although fine for points, meant that circular particles would appear to go partway through obstacles before colliding. Getting collisions to use these particles' radii was a long and arduous process, but the results are a significant improvement - and deserving of another screenshot! 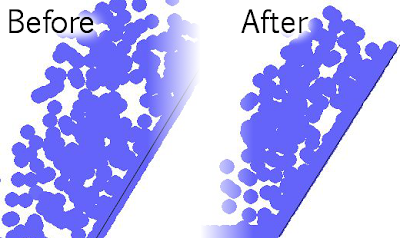 You'll notice that there's still a bit of overlap in the 'after' image - this is entirely intentional. Without any overlap whatsoever, the gaps between particles show up very clearly and look a bit strange, and sometimes numerical inaccuracies lead to particles hovering just above obstacles. So, I've added a parameter to the 'constants.py' file (which is another new addition, incidentally) which specifies what factor of the radius is allowed to pass through obstacles. At the moment, this is set to 0.3 (30% of the radius), which seems to work quite well.
The last (and most significant of all, but sadly lacking in pretty screenshots) development I'll be writing about on this fine morning is the PyIgnition Particle Effect (PPE) file format. It's an XML-based file format for storing ParticleEffect objects in their entirety (keyframes and all) such that they can be easily re-loaded into another ParticleEffect later. At present the format's design is complete and the function for writing to it is finished - see here for a sample output. Reading from it is a bit more tricky, but progress has been good: it can already read particle sources and all three gravity objects (including all keyframes and particle keyframes), which leaves only the obstacle objects unreadable at present. This is the last feature on the list for the 1.0 release, so as mentioned at the beginning of the post I'm fairly certain the planned release date of the 30th should be a meetable one.
Updates to follow, ideally close behind!
Posted by Animatinator at 1:02 pm 1 comment:

You're looking at the official ExeSoft blog! Here you can find the latest news and information about our various projects, along with the occasional ramble (and a sufficient dose of incoherent ranting). To easily keep up-to-date, you can subscribe to our RSS feed by clicking here.