Salutations to all! Apologies for breaking my vow of voluminous posting with such haste and dexterity, I had four exams and two horrible deadlines to contend with. Gloriously, all that now stands in the past, leaving the way clear for consistent blogging! Hopefully.
Now, with the traditional excuses out of the way, I shall share with you the primary purpose of this posting: 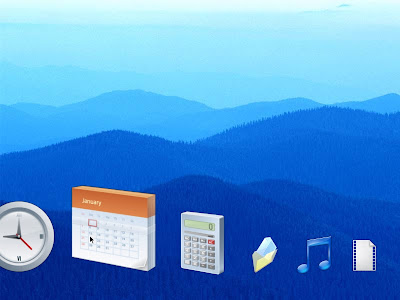 It's the Mac OSX Dock, but as you've never seen it before: emulated in Pygame! Essentially, I felt like setting myself a coding challenge which would produce shiny results (shiny is good), and this seemed apt, being as it is both shiny and pretty flippin' challenging to code.

It took many an hour to get the scrolling to work properly - the items have to position themselves such that the space between each one is consistent, and so that the focus of the 'bulge' in the menu is always under the mouse cursor. And with that achieved, it has to scale in and out smoothly at either side (a surprisingly difficult thing to achieve) and the items have to be aiming to reach their original positions at all times (again, surprisingly difficult; most seemed content to simply remain in their shifted positions when the mouse focus was removed). Ultimately, the code ended up being near-unreadable. But well. It works. And, when it comes to graphical elements such as this, that's all that really matters.

It's also designed with the intent of being imported and shoved into other projects, and as such is fairly modular. One can also alter its items, size, position, scaling factor and mouse response distances via arguments supplied to it upon its creation. And, surprisingly, it can actually be used as a menu and not just pointless spiffery: there's a function which returns the index of the item currently under the mouse.

For more information and to download the source code, go to http://pygame.org/project-Pygame+Dock-1412-2506.html. Alternatively, if you can't be arsed downloading it, you can watch a demo video... right here. Behold:

In other news, I recently wrote a program which generates sentences that could be English, but aren't (that said, they occasionally are). It uses a Markov Chain system, which essentially means that the next letter in a word is chosen randomly but is weighted by probabilities of certain letters following the current one. For example, the letter 'a' is much more likely to come after 't' than 'z' is. These probabilities are found by training the program using a corpus, which in this case was simply a gargantuan list of English words. The following paragraph has been generated entirely by the resulting program:

As you can see, though it seems fairly random the words are almost all pronounceable, something which would not have happened had they been generated completely randomly. That said, there are some odd ones in there. 'Z' would be an example. I do like the sound of 'abearalaboncacsimolobaprdalimecacallakle', however. I take it to mean 'possessing the qualities of a mentally-challenged bear who vaguely resembles lime cake'. If enough of us use it regularly, it might just make the dictionary.

Oh, and while I'm here, I might as well update you on the UCAS situation. St Andrews finally replied, and gave me an unconditional offer! Hoorah, now I can reject them. Mwahaha.

They're a bunch of abearalaboncacsimolobaprdalimecacallakles anyway.

Posted by Animatinator at 2:23 pm 2 comments:

You're looking at the official ExeSoft blog! Here you can find the latest news and information about our various projects, along with the occasional ramble (and a sufficient dose of incoherent ranting). To easily keep up-to-date, you can subscribe to our RSS feed by clicking here.